Munnar, popularly known as “Kashmir of South India”, is a famous tourist destination in the Idukki district of Kerala state. Known for its picturesque hills and Neelakurinji (a shrub with purplish-blue flowers that blossoms only once in 12 years ), it is one among most sought out destinations by the tourists visiting India.

With the mercury levels touching almost zero degrees, snowfall was the main attraction that rallied tourists to Munnar in December 2018. In the meanwhile, I upgraded from 9-year-old Sony a390L DSLR to Sony ILCE-6300 and was planning for short trips to capture landscapes using my new gear. Initial plans were to travel to destinations nearby Bengaluru. As part of this, I toured Shivanasamudra Waterfalls along with 2 of my friends. I will write another post on this trip soon.

On a short vacation to my hometown in January, I decided to drive to Munnar along with my cousins. Munnar town is almost 100 kilometres away from my native, and I knew that it was indeed a poor decision to drive that night. After a long journey from Bengaluru to Hometown, I was tired. My cousins too had a tiring day at work. But the desire to capture the snowfall and the sunrise persuaded me. I promised my cousins to drop them back the next morning as they have to be at the office by 10:00 AM.

With my camera and its accessories, winter clothes and a few bottles of water, we started around 9:00 PM in my car. The plan was to reach the Top Station (around 30kms away from Munnar town) by 5 AM to capture the sunrise. By midnight, we reached Adimali where we stopped to have tea. The temperature had already dropped to 7 degrees. Relying on the time and distance information provided by Google Maps, we decided to take a nap somewhere between Adimali and Munnar. Drive for 3 hours had already taken sleep away from me. My cousins had dived into a deep sleep which left me alone beneath the clear sky of Munnar. I decided to drive slowly to our destination.

Somewhere en route to the Top Station, I spotted an open place where the sky looked so beautiful with a lot of stars. The time was around 2 AM by then. I stopped over there to experiment with astrophotography. I spent almost an hour to figure out how to use bulb mode in my camera and was able to capture the following images. 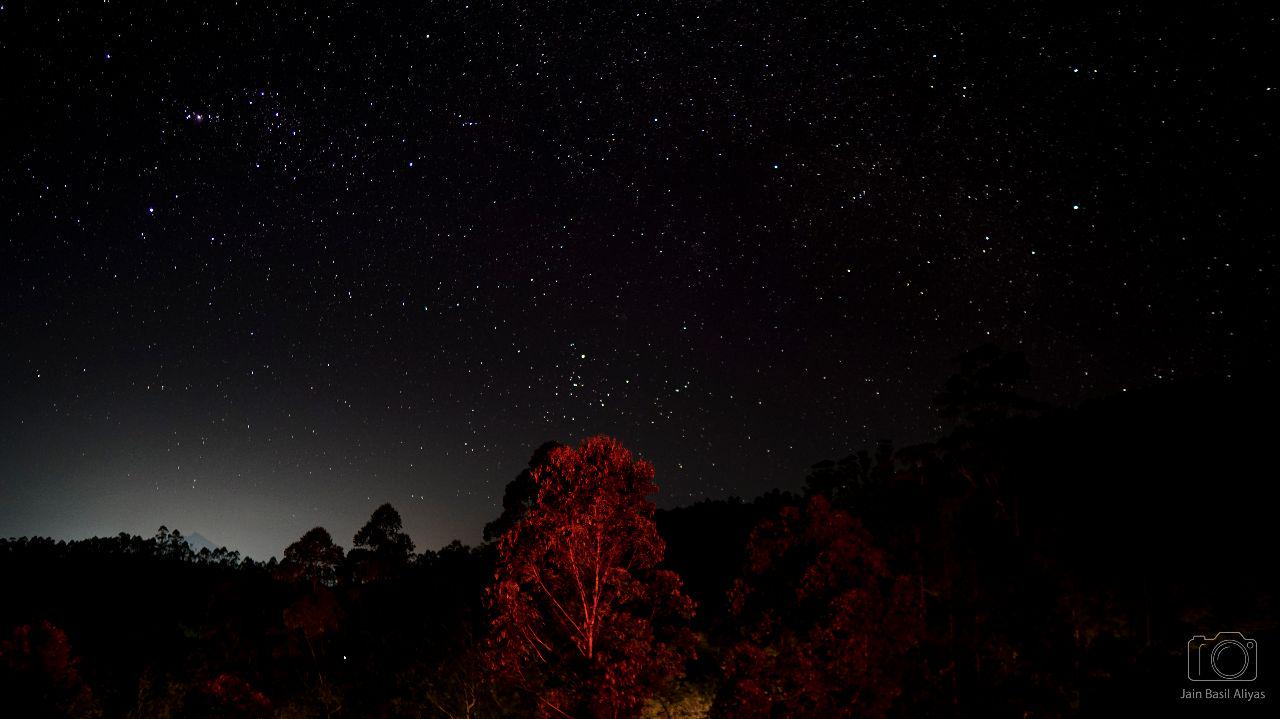 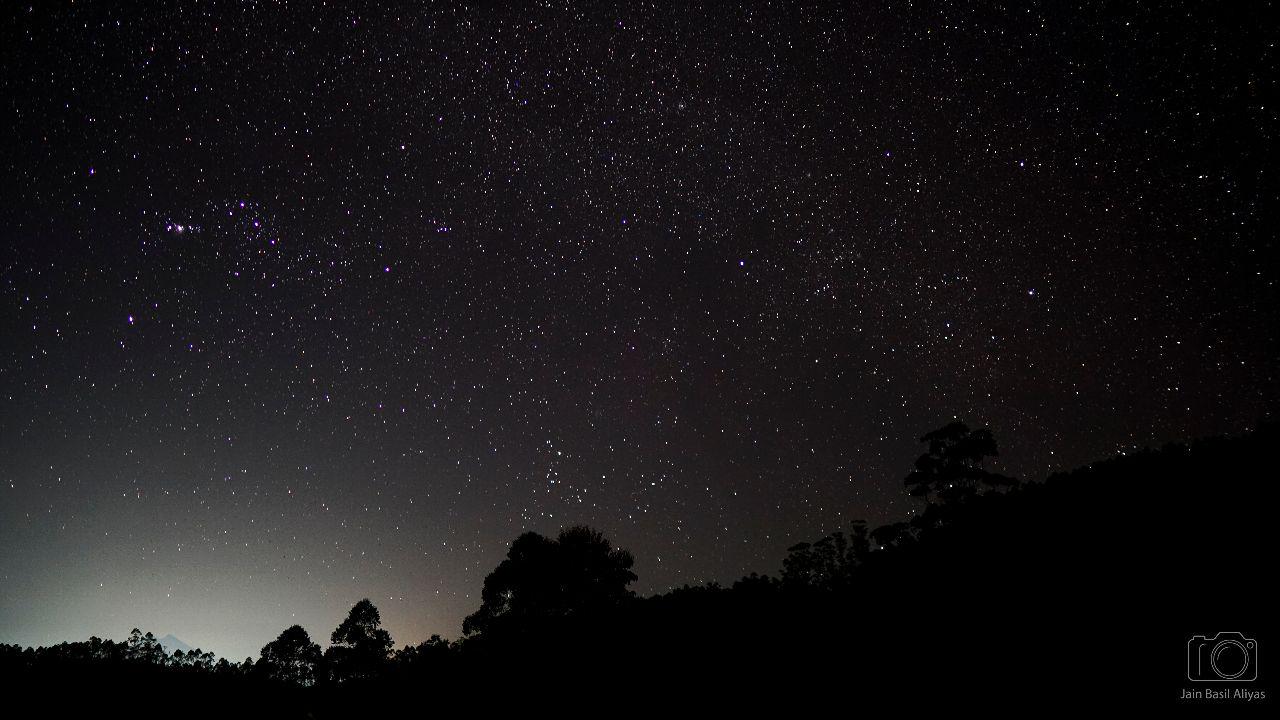 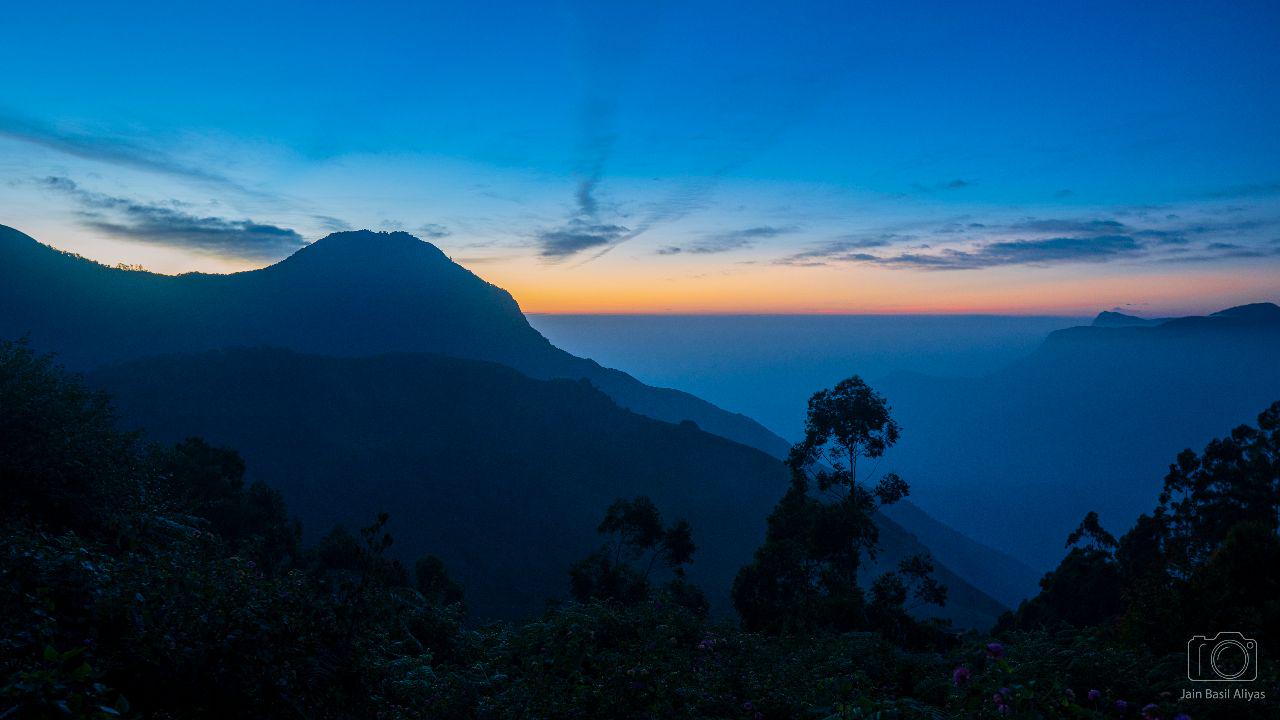 Around 5 AM, we reached our destination – Top Station – the highest point in Munnar and falls on the Kerala – Tamil Nadu border. Early arrival helped me to find a photo spot and capture the sunrise. We started driving home around 6 AM, as my cousins had to report to their offices for duty. Munnar is a paradise, a must-visit destination for travellers exploring Kerala.